GB Corp. Will Make You A Big Shot If You Have Multiple Game Boys

It seems that the development scene around retro Nintendo hardware continues to draw a loyal group of enthusiasts, with the Game Boy in particular seeing a number of new and revamped games recently. An intriguing project that’s come onto our radar is GB Corp., which has a rather fun mechanic for those that have a collection of Game Boy models.

Developed by ‘Dr. Ludos’ and released on itch.io, it’s an ‘incremental / idle game’ that will run on the original hardware, and its smart twist is that it’s better to alternate playing across various models. You’re running a corporation staffed by employees that are actually Game Boy Systems, and your goal is to manage your team (and their battery levels) to maintain productivity and boost profits.

The official description and a couple of screens are below. 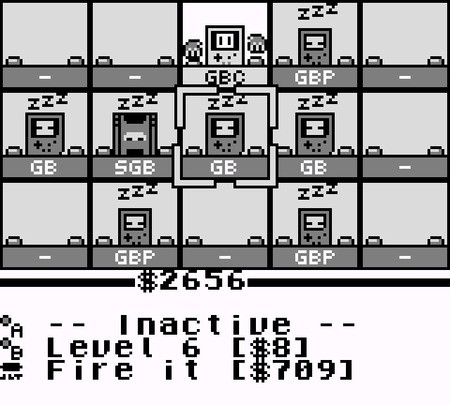 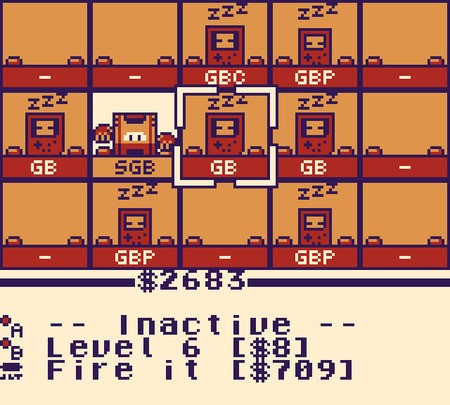 The core gameplay is quite simple. You hire consoles from the Game Boy line (Original GB, GB Pocket, GB Color and Super Game Boy), and they work for your “push-button” company. When you have earned enough money, you can hire more employees, and upgrade the ones you have so they bring back more income. Also, you must be careful of their power levels: change the batteries of your employees when they are empty!

While the concept is quite simple, this game also has a unique feature: the consoles you hire are effectively working only when you run the game on the same console model! So, to put your GBC employees to work, you need to play the game on an actual Game Boy Color (or set your emulator to “GBC mode”). If you want to make your GBP employees active instead, you’ll have to unplug the cartridge and put it into a Game Boy Pocket from your collection (or change your emulator settings). The game uses a SRAM save, so the game progress is kept while switching consoles.

This “console change” is a real gameplay mechanic and not a simple gimmick. When you only have a handful of employees, changing batteries isn’t a burden. But when you employ dozens of them, it costs loads of money. However, when you switch from one console model to another (say, you switch the cart from a GBC to an original GB), all the active employees get a new set of batteries for free!

It’s a fun idea, and to play on native hardware you’ll need to put the ROM on a flashcart; of course if you don’t have a collection of Game Boy systems the page gives advice on how to enjoy it through an emulator.

Let us know what you think of GB Corp. in the comments!